The classification plan links each document to the totality of the archive funds put online and places it in its historical context.

In order to provide visitors with a ever deeper insight into the history of the Maison Worms and to adapt to the more or less exhaustive knowledge that each of them has of this history, the information have been divided into three levels, ranging from the very general to the very specific: chronology, periodicals, "recueils des informations de janvier à décembre" (document in French = archive compilations from January to December).

It summarizes the stages of the evolution of the company from the birth of the founder, Hypolite Worms, in 1801, until the present time: 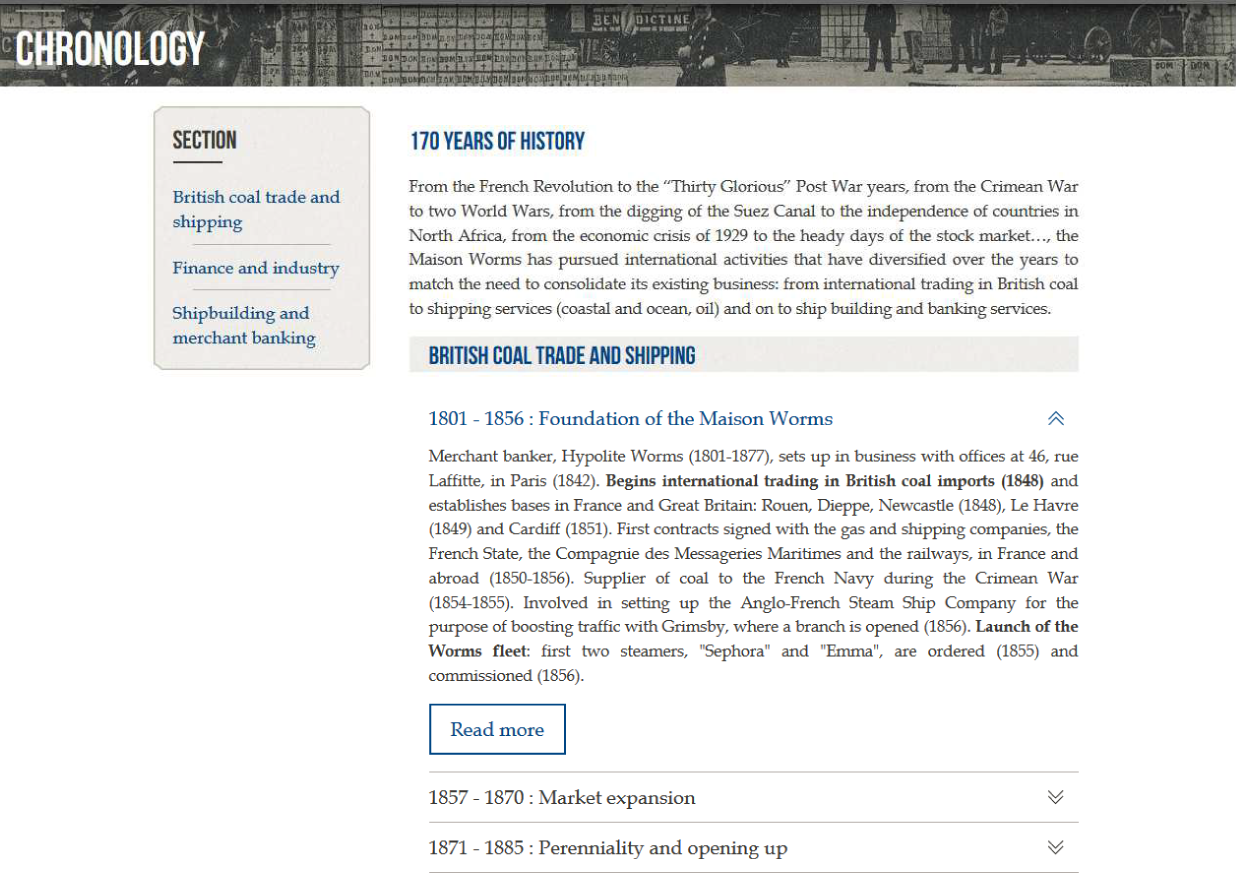 These articles are accessible from the chronology by the "read more" button situated under the summary of each of the periods. They chronologically present, year after year, the constituent events of every phase of development. 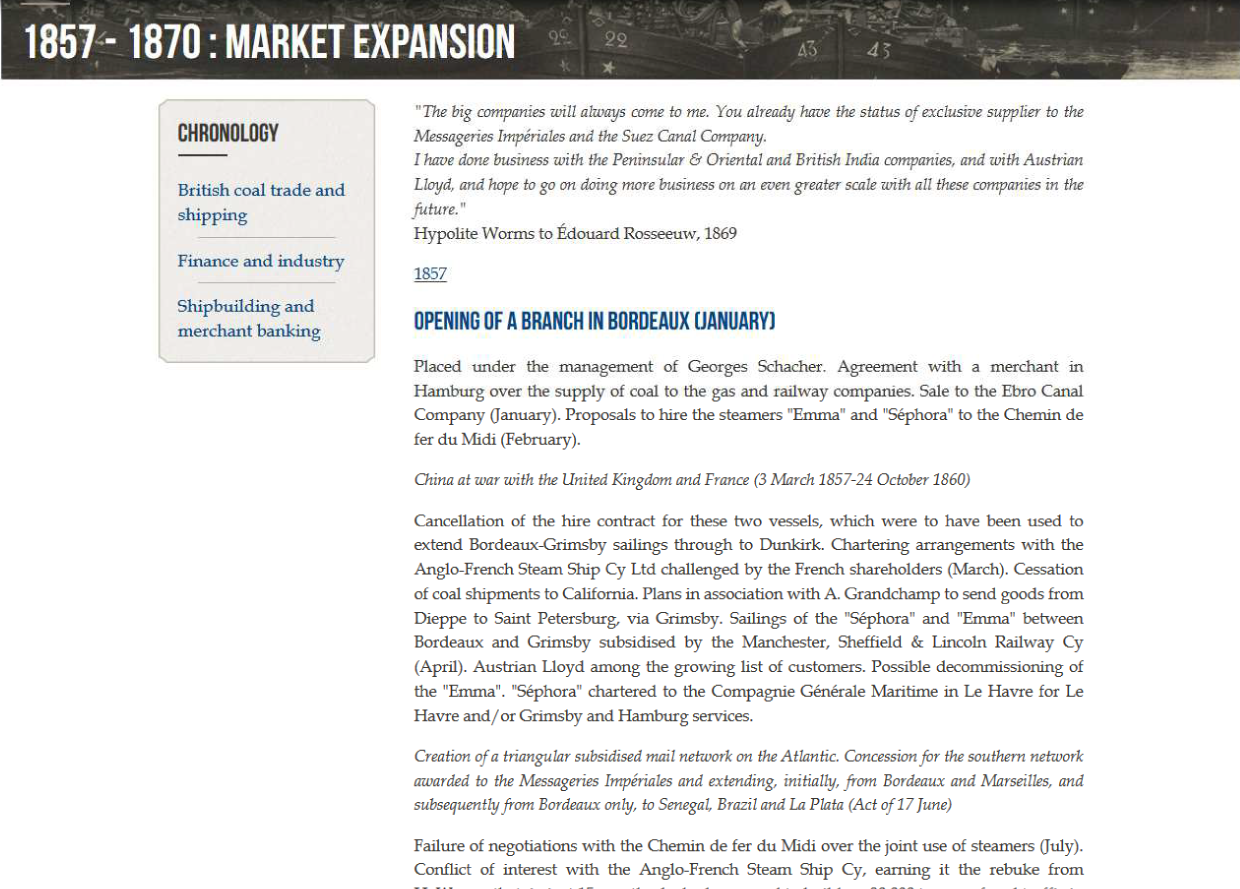 These files are essential to the knowledge of all available data. They are accessible from the periodicals by clicking on the years that divide the text into paragraphs. They are also placed at the top of each of the annual indices in the "Archives" menu: 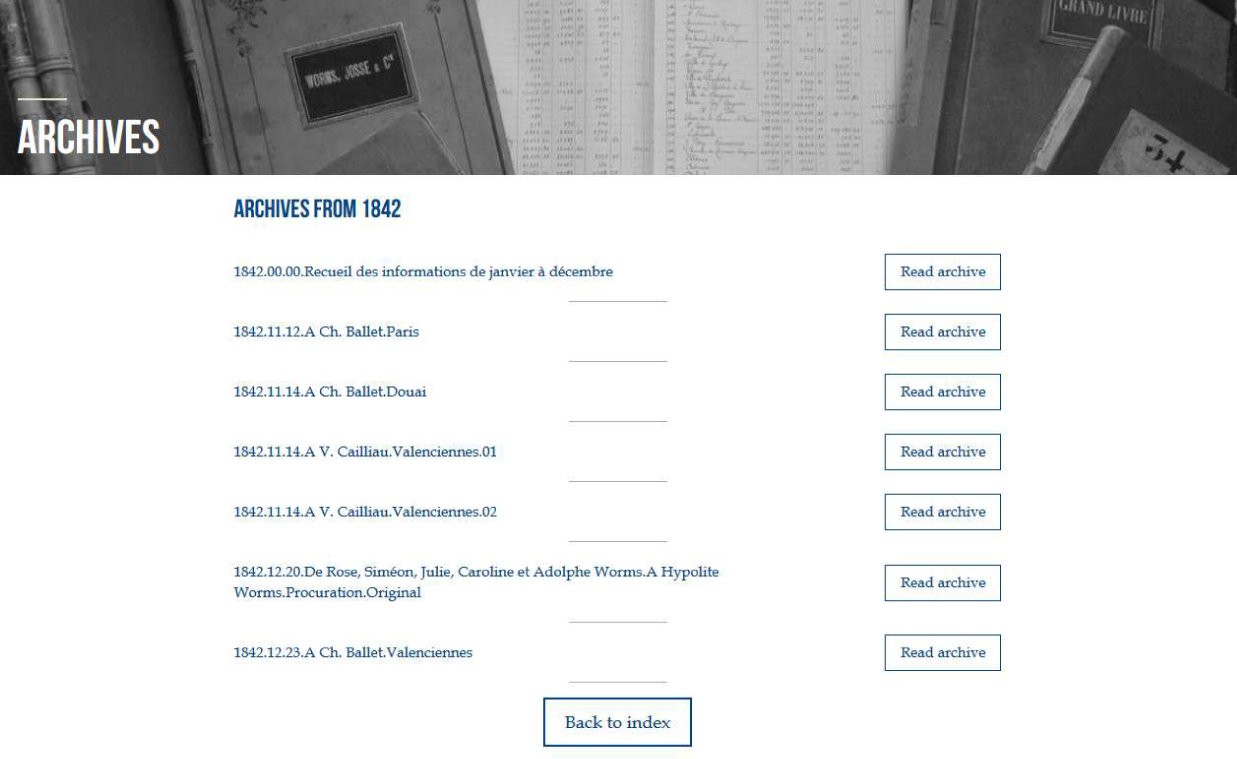 Almost all the archives are written in French and were not translated into Englishdue to the large quantity of the material.

The archives are classified chronologically according to their dates of emission, or of reception when the former are not indicated. All filenames begin with the year, usually followed by the month and day (example: 1942.01.13 ..., 1942.01.19 ...).
Undated testimonials are classified according to the year of the most recent event mentioned in the text and are listed with the year in question followed by "00." (Example: 1942.00 ...).
Whenever the name of the sender is known, it is indicated after the date (de = from). It can be followed by the name of the recipient (à = to). (Example: ... De Simone Tournier - Worms et Cie.A M. Ladoy...). It can also be replaced by the latter when the sender is not quoted or when the document emanates from the Maison Worms or one of its services without specification of a particular author (example: 1942.10.01.A J. de Grandmaison...).
The title is supplemented by a possible indication of the place of origin and / or destination of the document, and ends with a specification about the nature of the document (example: Original ... Note ... Agreement ...).
The terms "non daté" (="undated"), "non signé" (= "unsigned"), "non signé, ni daté" (= "unsigned and undated") are used whenever one or more of the criteria used to identify the archive are lacking (1942.00...Article sur le naufrage du Jumièges (non signé, ni daté).

The archives are either in manuscript form or in typewritten form. All were digitized. The text of the former was transcribed via a word processing software. That of the typewritten sources was extracted from the images obtained by scanning, and reconstituted via an OCR (optical character recognition) software before being reformatted in Word.
Then, the texts were imported into the website in as many articles as needed.
The PDF of each document is accessible at the end of each file, except for the poor quality reproductions and the correspondence extracted from the nineteenth century letterbooks (written on both side of the bible-paper, making the images unreadable.
In order to consult a PDF, a download form must be completed. Thanks to this interface, Internet users can make known the subject of their research and any study that they are carrying out on the history of the Maison Worms and its activities. No personal data are retained.

All the data published on this website can be queriedby using the "search" function situated at the end of the main menu.

Some proper names and names of ships may be written differently depending on the documents. As these variants can skew the research results, we suggest you to refer to the following table of correspondences and search the database according to the most common spelling: