23 April 1866: Hypolite Worms asks his London agents to find a ship with a capacity of 800 tons to transport a cargo of "steam coal" to Yokohama.

At that date, the trading house he had founded in Paris in the early 1840s was one of the foremost companies specializing in the export trade of English coals. The Maison Worms achieved this ranking due to its presence in the most reputable mining regions of Great Britain[1], and also thanks to a customer base of large consumers of coal (gas and electric-power factories, railways, navies and steam navigation companies) that it acquired in France and abroad. One of these shipping companies, which figured prominently, was Messageries Maritimes. In 1851, when the latter was awarded the postal service in the Mediterranean, they contracted out to the Maison Worms the supply of coal to the depots in all the ports of call where their steamers refuelled. Since that time, whenever their network was extended (Algeria and Tunisia in 1854, the Black Sea in 1855, South America in 1857), the Company signed new, exclusive contracts with the Maison Worms. The same thing happened in 1861 when the French government granted Messageries Maritimes the contract for the Postal Service in "Hindustan, Cochin China, the Dutch East Indies and China, with overland transhipment between Alexandria and Suez." The main ports were Marseilles, Port Said, Suez, Aden or Djibouti, Colombo, Singapore, Hong Kong and Shanghai. Then, Kobe and Yokohama in 1865.

Just as the creation of this Far East shipping line was instrumental in the constitution of the French colonial empire in Asia, its anchorage in Japan springs from the special conditions, which then prevailed in that country. Urged by foreign powers to break its voluntary isolation, ("sakoku") which had dominated its politics since 1641, Japan started to open up to the outside world in the early 1860s. This new era - known as the Meiji - ended the "Shogun" and, with it, the feudal system. A symbolic and founding act occurred on 23 October 1868: the imperial capital was moved from Kyoto to Tokyo (formerly Edo). Consequently, the Empire of the Rising Sun became industrialized, and international trade developed.

In his correspondence, Hypolite Worms recalls that he "sends considerable amounts of coal over the seas of India and Japan" just as he emphasises "the frequency of his charters in Asia: Aden, Singapore, Point de Galle and Yokohama ". These two quotes are taken from letters he sent in 1865 to Borel Lavalley & Cie, the company to which Ferdinand de Lesseps had awarded the contract for the excavation of the Suez Canal. The excavators and other mechanical dredges, which were used to dig out the canal, were powered by steam. Hypolite Worms offered the services of the Maison Worms to supply the coal required. The offer was accepted. Thus, over a four-year period, the English branches of Maison Worms bought and shipped the thousands of tons of fuel required to complete this undertaking. The Suez Canal was inaugurated on 17 November 1869. A few weeks later, Hypolite Worms, convinced that this new waterway would revolutionize trade between Europe and Asia, opened a branch in Port Said and an agency in Suez.

To increase activity, in 1871, he joined up with his confreres from London, Messrs. James Burness & Sons. This company had its own coaling stations in the ports of Gibraltar, Malta, Aden, Point de Galle, Singapore and Yokohama. When combined with those stations belonging to the Maison Worms, there was now an uninterrupted chain of depots between England and Japan that the two partners could offer to shipping companies, including some Japanese shipping companies that had just been created.

From the beginning of the Meiji era, new ports emerged and commercial vessels were purchased from abroad. However, the construction of naval vessels was lagging behind and diplomatic tensions with China made this situation alarming. To address this problem, the Empire called on the services of a French naval engineer, Louis-Émile Bertin, who, from February 1886 to March 1890, organised the Japanese Navy. Notably, he entrusted to the "Société des forges et chantiers de la Méditerranée" the construction of a cruiser in Le Havre, and two 4,300-ton battleships, the "Matsushima" and "Itsukushima", in La Seyne-sur-Mer.

The Maison Worms which, in 1886, ensured the supply of coal for the first ship, presented its offer of services for the following two ships. In April 1892 the Maison Worms made contact with the London representatives of the Japanese shipping company Mitsui & Co., and ordered its Marseilles branch to "send to Toulon in towed barges the coal that the battleships would need in this port, and to ensure supplies in the provision stops in Port Said, Aden, Colombo and Singapore." On 6 October 1897, Worms & Co. sent to the Extraordinary Envoy and Plenipotentiary Minister of His Majesty the Emperor of Japan in Paris, the following letter: "We have learned via the press that you have drawn up a contract with the "Société des ateliers et chantiers de la Loire" for the construction of a cruiser for the Navy of your government. We kindly ask you for permission to submit this offer of our services for the provision of Cardiff coal, which may be needed for this vessel to navigate from Europe to Japan. We have already made similar arrangements for the supply of fuel to warships which were sent from England for your government, including the "Fuji" and the "Yashima". The latter has this very week been consigned to our facility in Port Said and Suez, where it loaded its coal supplies. Through our numerous coal depots, we have supplied coal to Nippon Yusen Kaisha since the creation of its shipping lines in Europe. »

A contract with the Nippon Yusen Kaisha was indeed signed on 7 December 1896. It covered the bunkering of ships in the ports of Le Havre, Bordeaux, Marseille, Algiers and Port Said. It was to be renewed as long as the ships of this important company were powered by coal. Relations with Nippon Yusen Kaisha lasted for decades: Worms Services Maritimes was its agent in French ports until the mid-2000s.

Once Japan had a merchant navy and its ships were sailing on all the seas of the world, the country began to extract its own coal. Mines were developed from 1868 onwards. In fact there were so many mines that they produced enough coal to export on a large scale. The strikes that paralyzed the industry in Britain in 1893 and in the years that followed, intensified the penetration of the Japanese ore in the European market. Messageries Maritimes and Peninsular & Oriental, themselves, tried it. The Maison Worms remained faithful to the English coke. The danger, however, did not come from Japanese ore, but from another, far more competitive, source of energy: oil.

In October 1897, the Paris office sent information to the Marseilles branch on the progress of this fuel. "You know that for many years people have been talking about replacing steam navigation coal with liquid crude oil.... As regards its calorific power, one ton of oil is equivalent to two tons of coal ... Once a ship can be guaranteed bunkering all along its route, oil suppliers say that nothing will prevent its widespread use. The Maison Samuel, a very enterprising, very passionate, and very ambitious company, encouraged by the success it has achieved in the navigation of oil tank steamers and the development of its oil deposits for local consumption throughout Indochina, has decided to become the "pioneer" of this innovation, even without wanting or being able to decide whether the project is practical or profitable, or if it is just a pipe-dream: all we can say is that this Company seems determined to go ahead and is planning accordingly. "

In fact, rather than watching helplessly while this new source of energy was developed, the Maison Worms decided to participate. It became the general agent of Marcus Samuel & Co. (founders of the oil company Shell) for the sale of oil products and the construction of warehouses in Egypt, Palestine and Syria between 1898 and 1922. It was also responsible for providing coal to the tankers that carried the oil to Singapore, Hong Kong, Shanghai and Yokohama. 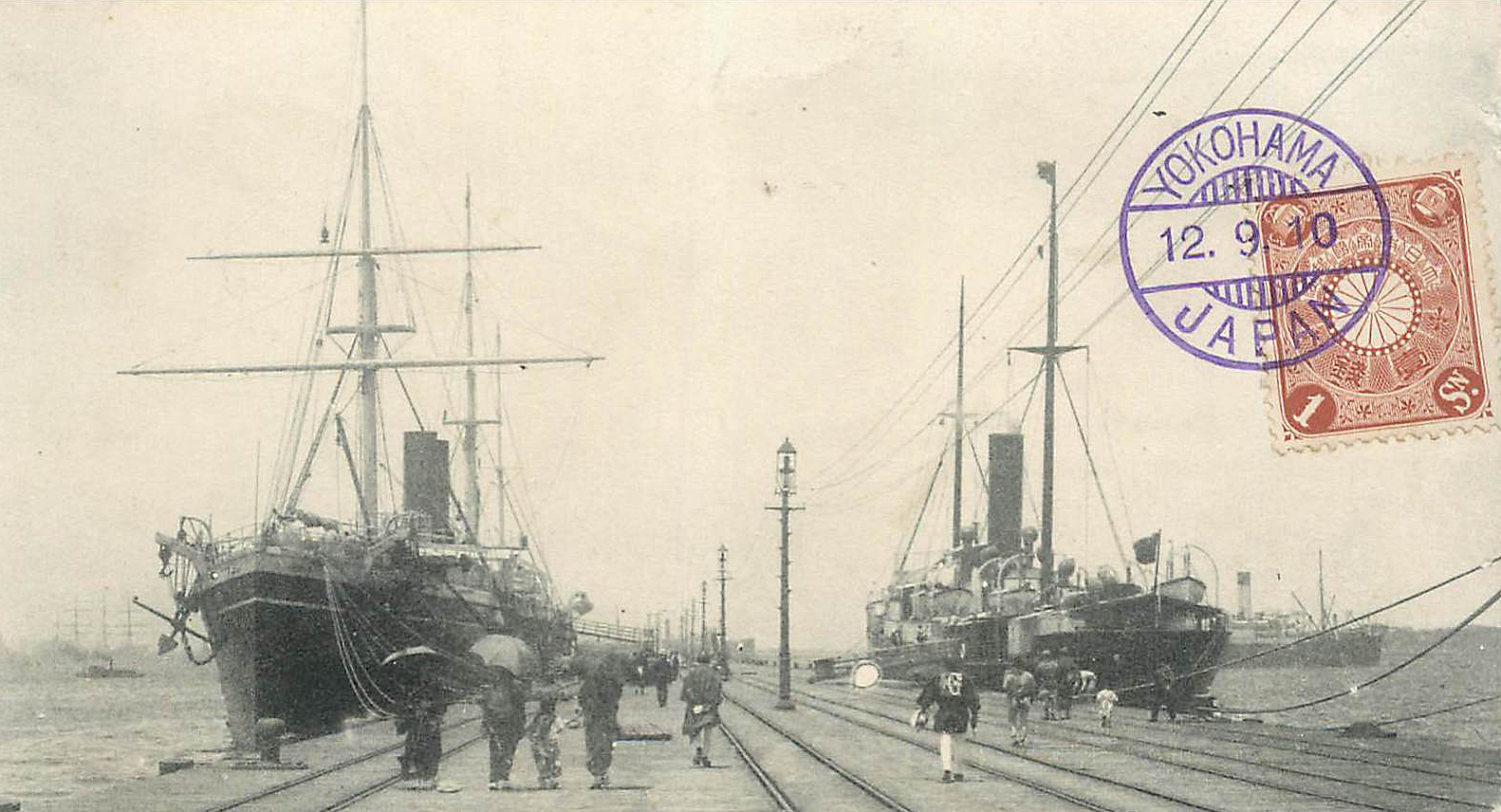 The last notable episode in the history of the relationship between the Maison Worms and Japan relates to the war between this country and Russia. The conflict began on 8 February 1904, and its objective was to allow the Russians to get permanent access to the Pacific Ocean. It was not devoid of colonial designs from the Japanese side either, especially with regards to Korea. It ended on 5 October 1905 with the victory of the Japanese, who regained a part of Manchuria and half of Sakhalin Island.

Meanwhile, the Maison Worms was almost caught at the heart of the confrontation. Its branch in Port Said, in fact, provided fuel for the two warring fleets. It toyed with the idea that it should concede the bunkering of the Russian Navy to one of its competitors, but this never materialised. In February 1904, two Japanese warships, the "Kasuga" and the "Nisshim" docked in order to take on coal. Instead of loading the expected tonnage, their commanders only took on the amount strictly necessary for one ship to reach Aden, and for the other to reach Perim. "We were fully aware in advance, it was said in the Paris offices, of the nervousness of the commanders, who were anxious to put some distance between their ships and Russian cruisers tailing them." The speed with which the Maison Worms accomplished the refuelling earned it the compliments of the Japanese Admiralty. It was reported by veterans of the coal services that the Japanese victory was in part due to the advantage that the speed bunkering the Japanese battleships, by their colleagues in Port Said, had given them over the Russians. The archives, however, do not contain any evidence to corroborate this.

Much more recently, a subsidiary of the Worms Group, Gaz-Transport, contributed to the construction of two liquefied natural gas (LNG) carriers the "Arctic-Tokyo" and the "Polar Alaska", which, with a capacity of 71,500 m3, were the largest LNG carriers, when they were floated in 1969. This achievement was made possible by an integrated process, with membranes made of Invar, which in late 1975, was the leading technique in France and abroad used for LNG construction. Indeed, it was chosen for almost 40% of vessels in service or under construction. The "Arctic-Tokyo" and the "Polar Alaska" were in service between Alaska and Japan.

Thanks to the representative of the Schneider Group, which undertook the promotion of this technique, Gaz-Transport licenced the majority of the major Japanese shipyards, thus permitting them to build numerous liquefied natural gas carriers themselves.

Thank you for your request. The file download will start in few seconds, wait for it.